I dare you to find an unpointed toe or a bent leg amongst these sparkling juniors. In this group, great form and beautiful performances are the rule and not the exception. Watching this meet felt like watching a senior meet, except with floor routine after floor routine that were delightfully performed. Below are the results and a video of the top scoring routine from the two nights. And at the bottom are our new Junior National Team members! All photos and videos are from USA Gymnastics (Photos by John Cheng and Geoff Bolte). 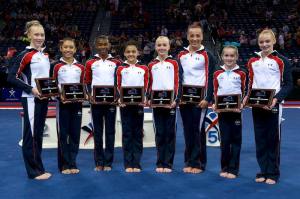 The top eight all-arounders were named to the Junior National team. It is not uncommon for Marta to add more.