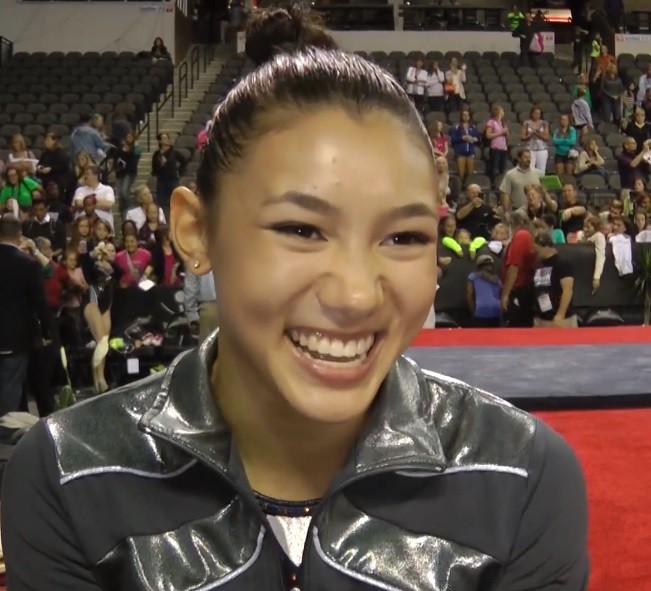 The Uneven Bars Final was packed with talented girls and difficult routines. Unlike the vault finals, a number of different outcomes seemed likely. In fact, the only thing I got right on my bars predictions was Kyla Ross in silver.

Gymnastics Coaching tweeted: “looks like I’m going to be eating my words. … I’m the guy who said Kyla couldn’t medal on Bars.” And then I remember that I was of the same opinion earlier this year. I couldn’t be happier to be wrong. And I need to remember to wait til closer to competitions to form those opinions! Especially because Simone Biles almost medaled in bars!

The Final started off with Yao Jinnan. This title was hers to win or lose. If she hit, it was unlikely that anyone could beat her. But as has so often been the case with the Chinese in finals, she fell. Granted, the skill she fell on is crazy hard. But she has hit it again and again. It was so disappointing. She held herself together well until the finals were over, when she burst into tears.

Huang Huidan was up next, and put up an excellent routine. One Chinese coach has said in the past, if one of us falls, we all must fall. She seemed to break that tradition by staying on the bar and hitting a clean routine.

After her came Rebecca Downie. With high swinging bars and an innovative routine, Rebecca is a crowd pleaser. However, she too succumbed to the pressure of a World Championship Finals and fell off at the end of her routine.

Sophie Scheder followed with a clean, beautifully swung routine. She has such great lines on bars! She is a pleasure to watch, but was not able to challenge for the top spots.

Simone Biles came up next. I am still getting used to the fact that Simone qualified for a bars final. And she lived up to the spot, hitting her routine!

Kyla Ross followed Simone, putting up her ever consistent, ever beautiful bar routine. She bested everyone except Huang. Going into the last two gymnasts, could it be that America would go two, three; that Simone would medal on bars?

Not if Aliya Mustafina had anything to say about it. Aliya threw her heart into it. It was enough to overtake Simone, but not Kyla and Huang.

Last up was Ruby Harrold. Ruby has an innovative, interesting routine! She performed it well, but it was not enough to change the medal standings.

In the end it was Huang, Kyla and Aliya. Kyla and Simone both talked to the press in the mixed zone about being pleased with what they did and how they needed to go back and rest up for tomorrow.