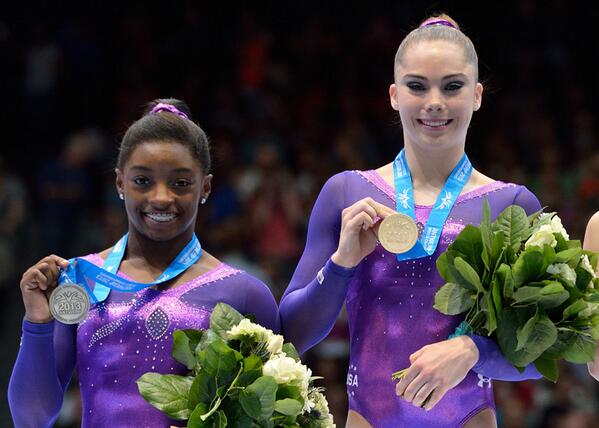 McKayla was not impressed on the podium, she was delighted. At the end of an exciting vault final, where McKayla was really challenged by others, she seemed to drink in the experience while the anthem played. Her eyes sparkled as she smiled a deep smile of contentment and a little giggle.

This was a great vault final, opening up with two beautifully executed, stuck vaults from Giulia Steingruber from Sweden. These were the same two vaults Alicia Sacramone won her world title with.

Next up Yamilet Pena survived another handspring double front attempt. She did not however, get it to her feet. It is a bit of a mystery. She always looks so upset that she didn’t make it, as if she really thought she had it. Yet we rarely actually see her make it. She falls on her second vault as well. Not a happy camper.

Oksana Chusovitina completes two clean vaults with some not so clean landings. But seriously, the fact that she is still competing and making finals is just mind boggling. Phan Thi Ha Thanh followed her with a fall and near knee injury. After her was Chantysh Netteb who fell on her vault and did injure her knee. Her vault was super high and clean, so this was surprising, and so sad.

Then the competition heated up with the top three gymnasts all at the end. Simone Biles threw a powerful and clean Amanar apart from her ankle cross. Almost sticks it and then has to take a hop back.

Her second fault was a thing of beauty. Great height and distance with perfect form! This most definitely put up a huge challenge for McKayla.

Next was Hong Un Jong. She had submitted the TTY to be named after her, so speculation was rampant. She hadn’t actually done one in Antwerp, so it seemed unlikely that she would throw it at the finals. If she was going to win gold, she needed to throw it. But she was almost assured a medal if she stuck with her Amanar. And to the relief of American fans everywhere, she stuck with the Amanar. After all, if she competed it, it was not likely to be a great TTY, and it just feels “right” that it should be called a Biles or a Maroney. (Won’t that be interesting if that is determined soley by competition order in prelims next year? How do they decide that?!?). Anyways, Hong did a powerful Amanar with lots of power to spare, but a huge bounding step forward. Not enough to surpass Simone.

And as we all assumed it would, in the end it came down to McKayla. But this year, she had to have two great vaults to win. And that she did. She did a gorgeous Amanar that just barely landed out of bounds.

And a great second vault as well with just a small step to defend her World title.

The American team really has become something special in their bond to each other. A huge hug between McKayla and Simone, lots of laughter and smiles as they walked to the awards podium. What a great pair.

Step One on her four year path to Rio and an Olympic vault medal is complete. And done in the ever impressive Maroney style.

2 thoughts on “McKayla is Not Impressed. She is Delighted!”