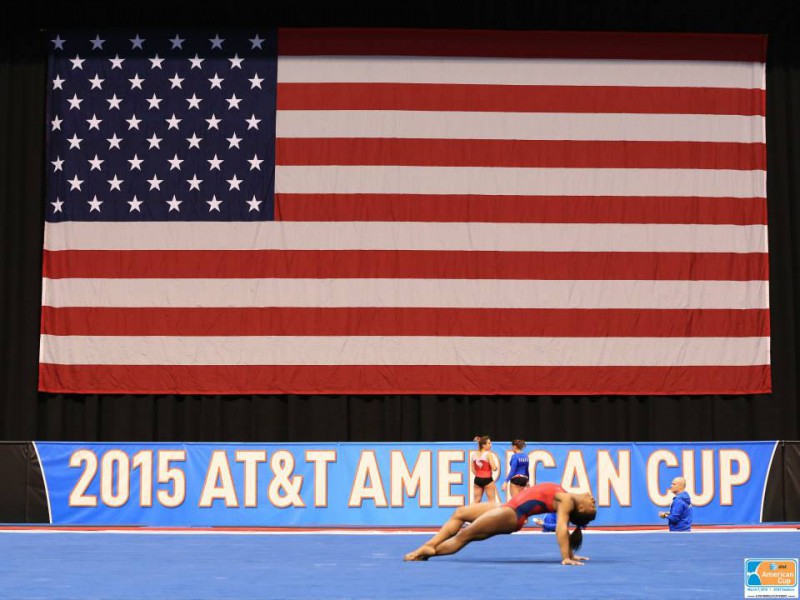 One of the most prestigious events for an American gymnast in the elite gymnastics calendar is the American Cup. This weekend marks the 2015 AT&T American Cup, which will be held in the Dallas Cowboys AT&T Stadium, one of the biggest venues for this important event. Simone Biles of World Champions Center, Spring, Tx and MyKayla Skinner of Desert Lights, Gilbert, Az will be representing the US women.

“I was really surprised, it was such an honor” said Skinner about being chosen to represent the US at this event. “I hope [people] realize I have become a bigger and better gymnast, I hope they can see I have been working really hard.” Skinner has added upgrades to bars and floor and hopes to debut them at the competition. She also hopes people notice how much she has been working on her flexibility and artistry. When she thinks about competing in such a big arena, Skinner says that it is “Going to be really cool. We will be more pumped and it [will be] more fun. It’s going to be different, but exciting.”

Biles, comes into the competition with more to prove than Skinner. As a two time World Champion, Biles is the heavy favorite to win.  Though she admits that the stadium could be intimidating, the veteran gymnast said in an interview with USA Gymnastics after training today, “Once you start doing gymnastics, you don’t really pay attention to how big the stadium is, you just focus on what you are doing in the moment.” In an interview earlier this week she said that “You need a big stadium for big gymnastics.” Big gymnastics is what Biles is all about. She is looking to make a great start to her 2015 year, and will be debuting upgrades on bars and floor. Already competing one of the highest start values in the world on floor, Biles looks to be adding even more with a new opening tumbling pass, while she continues to make the gymnastics look effortless.

Biles senior career has already been enormously successful, with two national and world all around titles to her name. But every iconic American champion can point to winning the American Cup, and Biles has yet to add this title to her resume. “Every time anyone says anything about the American Cup, they think of who has won it. So I think just adding my name would mean a lot to me.”

Don’t miss any of the action on Saturday. Watch the AT&T American Cup live.

In the meantime, check out Biles and Skinner’s podium training highlights.

Photos and Videos via USA Gymnastics.