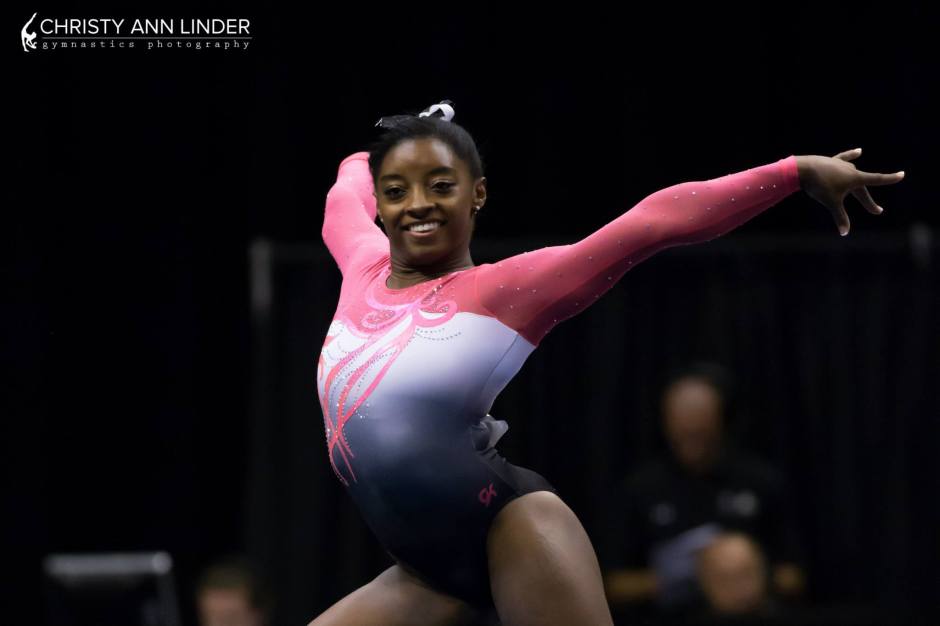 Simone Biles once again put her name in the history books, earning her third consecutive national title, with a two-day combined score of 124.1 and a out of this world 63 all-around score on the second day. The race for second and third was tight and changed throughout the night, but Maggie Nichols who shone from start to finish, managed to claim the silver with a 119.15. Aly Raisman grabbed the bronze with a 118.55. Key followed closely for fourth with a 118.35 and Douglas rounded out the top group with a 117.95.

Biles began the nights with a 61.1 all-around, a 1.4 lead over Nichols. Douglas, Raisman and Key all followed closely at just over a point to 1.2 behind. There was a full house at the Bankers Life Fieldhouse and the crowd was electric. The one at a time format made sure each gymnast got their due.

Rotation One began with Nichols on bars. She started her evening out with a bang, showing off her light, flowing bar routine with a stick to boot for a 14.8. Ross was up next on vault, delivering a double twisting yurchenko, but landed with her chest quite low for a 14.55. Douglas followed suit on bars, delivering a strong routine on her best event with just a small hop on landing. Biles started the night out on beam. This event has been a trial for her this week, but she overcame her earlier jitters with one of her best beam routines ever, including a stick on her dismount scoring an out of this world 15.9.

Raisman also got started on her best event, rocking the entire arena with her sky high tumbling, and hitting two solid floor routines in a row (minus a blip on her split half to end) for a 15.5. Key finished up the top group on beam as well. Redeeming her fall yesterday, she hit a great routine for a 14.55. At the end of the rotation Raisman had moved up a spot to third, overtaking Olympic teammate Douglas.

Rotation two kicks off with four big hitters in a row. Starting with Raisman on vault. She threw her amanar and landed with a locked knee but seemed to be ok, scoring a 15.35. After a great warm-up, Kyla fell on her dismount once again on bars, earning a 14.05. Douglas had a good beam routine with a few wobbles to earn a 14.2. Biles completely redeemed herself on floor, sticking her last pass for good measure for a whopping15.85.

Ashton Locklear nailed her bar routine, scoring a 15.45. Key took the floor with her tuxedo ringmaster leo to perform an enchanting routine that earned a 14.7. Nichols was last up on beam, where she competed a solid beam routine earning a 14.65. At the end of rotation, Raisman had gone into second, overtaking Nichols by .35.

Key led off rotation three on vault with a double twisting yurchenko. She has a fairly large hop on the landing but is beautiful in the air for a 15.2. Skinner hits her packed floor routing two nights in a row, earning a 14.8. Next up are Gowey and Kocian on bars, both trying to show their contributions to the team as bars specialists. Gowey scored a 14.7 and Kocian scored a 15.6 for her gorgeous bar routine. Nichols danced her way through her high tumbling floor routine for a 14.15. Biles followed her on vault, rocking her amanar for a sky high e-score of 9.9 and a 16.3.

Raisman was up on bars, where she did one of her cleaner bar routines for a 14.1. Ross looked to redeem herself on beam, showing a solid routine with a stuck dismount scoring a 15.25. Douglas finished out the rotation rocking her floor routine and improved by almost point from night one for a 14.8. At the end of the rotation Biles was in the lead followed by Raisman, Nichols, Key and then Douglas, all separated by eight tenths.

The last rotation was a battle for the podium, led out by Nichols on vault. Nichols hit a great amanar for a 15.85. Douglas vaulted a clean double twisting yurchenko with a small hop for a 15.15. Biles finished out one of her most dominant nights of competition on bars, where she earned a 14.95, totaling a 63 all-around for the night. Raisman followed on beam, needing the beam routine of her life to hold on to second. She was solid, scoring a 14.95, but it was not enough to hold on to second. Ross hit her tumbling passes on her floor routine, but missed a lot of her leaps and looked tired at the end, earning a 13.8. Key ended on bars, with a beautiful routine, just one overbalanced handstand to score a 15.3, pulling up into fourth. Alyssa Baumann finished out an incredible night of competition with her beautiful beam routine for a 15.05.

At the end of the night, Aimee Bowman was named coach of the year, Biles was named athlete of the year and Raisman was named sportsman of the year. The national team named on this night were the top six in the all-around Simone Biles, Maggie Nichols, Aly Raisman, Bailie Key, Gabby Douglas and Madison Kocian. Also added to the team were Nia Dennis, MyKayla Skinner, Alyssa Baumann and Kyla Ross. 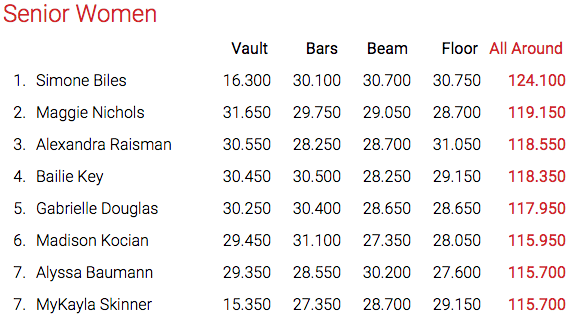 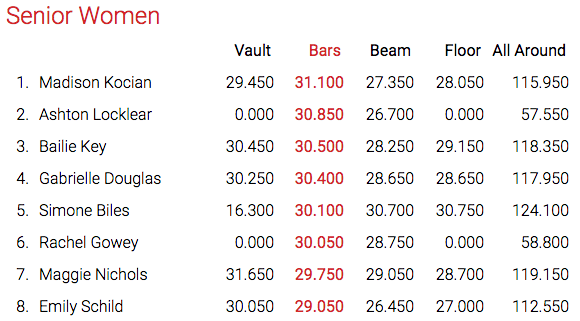 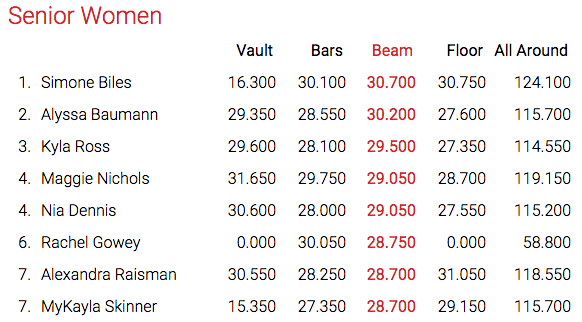 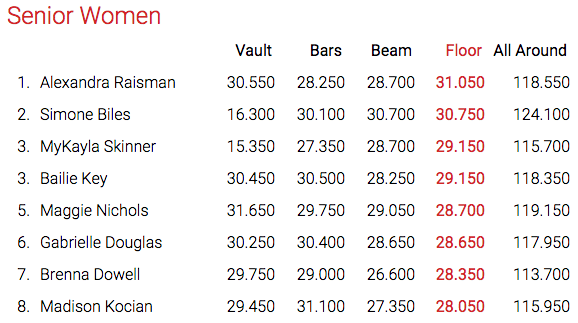 In history past, the National Championships outcome determined many things, including a place on the national and world teams. However, these days it is just an important stepping stone. Ok, maybe a boulder that gets you halfway across the river sized stepping stone, but still, just a step. For today’s gymnast, the selection for a spot on the national and world stage is a journey rather than a result of one important competition. So for each gymnast, the weight of their performance at this competition on their chances for a spot on the national or world team, the size of step this competition is for them, depends on where they are at in their journey. Let’s take a look. (As we look all pics are from Christy Linder’s Facebook page… you’ll want to check it out!)

Right now, there appear to be three ‘lock” positions on this year’s world championship team, Simone Biles, Gabby Doublas and Aly Raisman. Biles has absolutely nothing to prove.  She could fall in the river (or on each event) multiple times, and it just wouldn’t matter. Her only job is to stay healthy and continuing on being one of the most amazing gymnasts in history. Douglas and Raisman don’t have a whole lot to prove either. At both Jesolo and Secret Classics they have shown that they are still able to hang with the best of the best, and are on track to be at the front of the pack come world team selection camp. Barring injury, these three seem to be locks for this year’s World Championship team, and they just need to stay on course to not just make the team, but most likely win more World Championship medals.

Step it Up a Little Notch

The next three girls Maggie Nichols, Kyla Ross and Bailie Key seem to be the most likely to take the last three World Championship team spots. They are all strong all-arounders and could definitely contribute to the team on any event if needed. Nichols is probably the surprise leader of this group. Nichols is strong on all four events, and could easily lead off team USA in any one of them. Her super clean amanar vault makes her a huge addition to USA’s vault line-up, and the combination of the two factors make her very close to a lock on the team. However, she is still climbing the ranks and proving herself, so it will be key that she hits at this competition.

Ross and Key are both known for the same things- clean lines, clear heads and consistency. However, the issue for both is that they don’t bring in high enough scores to overcome the four mentioned above. While it is unlikely that any other girls will overtake them in the all-around, there are a handful of girls that can contribute higher scores on an individual event. For Ross to maintain her place as a bars and beam specialist, she will definitely need to show progress towards her newly upgraded bars routine. Both girls will need to score high and hit with consistency.

There are a few other girls who have an outside chance of making a worlds team because of one or two events if they are able to consistently and significantly outscore one of the girls above. Numerous combinations of the girls above could make a strong bars line-up for a worlds team, but it is not a sure thing that any of them would medal in an event finals. Madison Kocian, Ashton Locklear, Rachel Gowey and Brenna Dowell would all like to fill that gap. While each of them need to make a strong showing on at least one other event, it is CRUCIAL that they each hit a strong uneven bars routine. From Locklear, who placed fourth at last year’s uneven event finals at the World Championships but has been injured ever since, to Gowey and Kocian coming back from longer injuries, to Dowell making the switch back from NCAA, each gymnast has a rich resume and a strong ground to stand on, but a lot to prove.

Alyssa Baumann was on last year’s world championship team as well, and is a standout on balance beam. While team USA will have a STRONG balance beam line up, again it is less likely for them to top the podium on this event. If Baumann can come in with one of the top beam routines, she might be able to make a case for her spot on the worlds team. However, this would be a VERY tall feat for her.

MyKayla Skinner was another member of last year’s world championship team, but if ever there was a year where you cannot rest on your laurels, it is this year. With Raisman and Nichols in the mix, Skinner has dropped a notch in her contributions on floor and vault. She will need to perform the routines of a lifetime on both events to show that she still has a place on the world team.

Step Up to the Plate

Amelia Hundley has mostly hit when it has counted, and has shown that she can come back and give it her all at the recent Pan American Games. Hundley is a strong all-arounder, and can definitely deliver on bars and floor. However, to keep pace with the other girls who could contribute either as an all-arounder, a bars specialist or a floor specialist, Hundley will have to deliver some of the best routines she has ever performed. As will Madison Desch. Desch was an alternate at the 2015 World Championships and was recently selected to compete at the Pan American Games. Looking like a lock for the all-around, Desch fell on beam and ended up second. While Desch is a strong gymnast, she just needs to show higher scores and more consistency than in the past.

Nia Dennis has been a gymnast that many have expected to top the podiums at this point in her career. Undeniably talented, Dennis could be in the mix. However, her consistency has always been an issue. A recent gym change could be what Dennis needed to move from talented but inconsistent to a contender. If Dennis wants a place on this year’s world team, she will have to reflect that in her competition.

Emily Schild is the picture of clean lines and technically perfect gymnastics. She has been stepping up to every challenge given to her this year, unfortunately, her scores are just not on par with the rest of the field. The same can be said of beautiful to watch Lauren Navvarro and Polina  Shchennikova. Both round out the senior field with gymnastics you don’t want to miss, but often is.