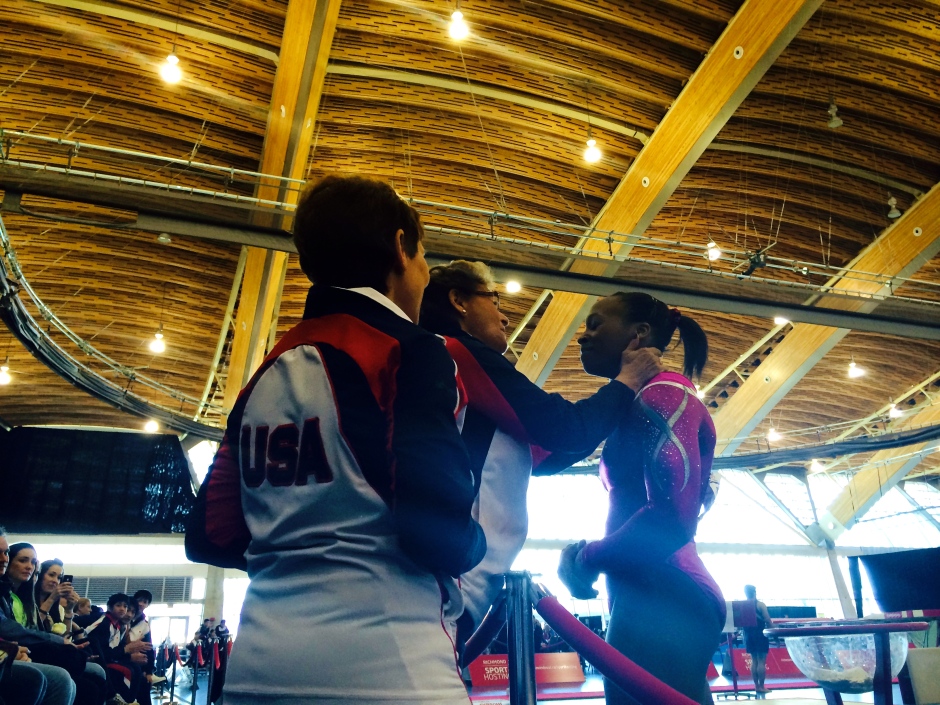 Gymnastics. A sport about constantly reaching for perfection. And then reaching for even more. Setting goals – small goals that lead to large goals, large goals that lead to larger goals, that eventually lead to the elusive end-goal. Since perfection is not actually attainable, the struggle to define what those end goals truly are, and when you have reached them, is quite difficult. So choosing to go out when you are at the top of your game, yet have not actually reached the “normal” goals of elite gymnastics is not a decision we see often in the world of gymnastics.

Right now, Ebee, as she is affectionately known to her fans, is the “it” gymnast. Many had declared 2014 as the Year of Ebee. She won the all-around in both international competitions she competed at early this year – the American Cup and the Pacific Rim Championship. She won the all-around in the FIG World Cup Series. She scored a career high beam score in March at the American Cup, and her career high floor score in April at the Pac Rims. Added to that were  her two best all-around scores at the same meets, reaching within tenths of Simone Biles all-around score at last years World Championships. With injuries abounding, Price seemed to be a lock for this year’s World Championship team, and a definite top contender for the all-around world title.

And though Price has accomplished so much internationally, winning four World Cup titles, these are goals she has never attained. In her first year as a senior, she was named as an alternate to the 2012 Olympic Team. In 2013, injuries held her back from being named to the World Championship team. And so it seemed an obvious choice that Price would defer her scholarship to Stanford for at least a year to make a run at this World Championship team, if not longer to work towards Rio. When you add all that up, it is as refreshing as it is unexpected to see Elizabeth Price retire from elite gymnastics this spring.

You see, these goals may be the ones we expect of elite gymnasts, but they are not Price’s goals. “I never really planned on going to Rio,” Price told NBC Olympic Talk. “It would have been a huge experience if I had gotten to go to the Olympics, or if I were to go in 2016. … But I don’t think that there will be any regret or anything for me not going.”

Though she had not planned on Rio, it would still seem that deferring for a year to go to the World Championships in light of her current success would be in order. “Even though it made me a better competitor, it was really a decision that I wanted to move on from gymnastics. I felt like I had accomplished everything I wanted to with my elite gymnastics career. I don’t think worlds would make me feel any better of how well I did [as an elite gymnast],” she said.

As a fan of gymnastics, I am most used to seeing a mix of heartbreak and success at the end of a gymnast’s elite career. Either not having achieved what they longed for, or having achieved it, then wanting to achieve it again and falling short. To see someone like Price, achieve more than she hoped for in elite gymnastics, and then keep her focus on HER goals (NCAA gymnastics) and move on towards those is quite refreshing. It is so wonderful to cheer her on with a heart full of happiness at all she has accomplished.

Price will be attending Stanford in the fall, and will no doubt dominate the NCAA scene. She currently competes some of the most difficult vault, bars and floor in elite gymnastics. Going into NCAA with that kind of difficulty and a healthy body will make her a standout for sure, and an incredible addition to the Stanford team. Price says she chose Stanford because it is a great academic institution with a great gymnastics team.

And just for fun, her career best vault: