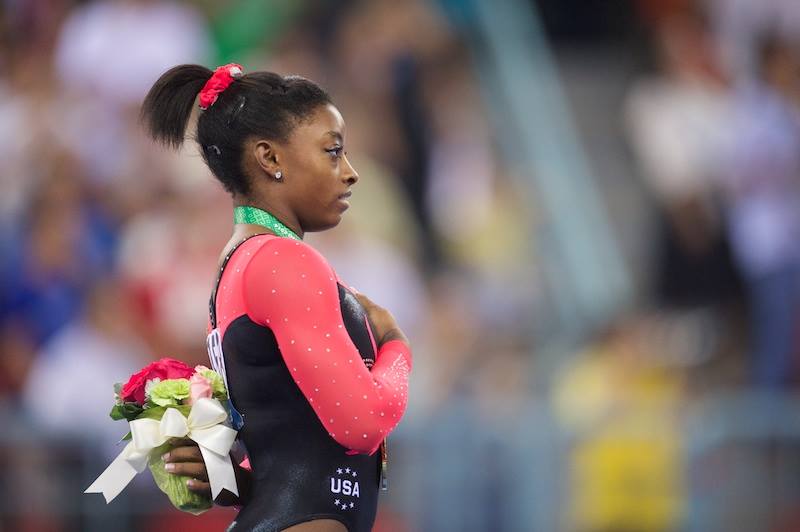 Simone Biles had a historic competition at the 2014 World Championships in Nanning, China. She took home gold medals in the all-around, beam and floor individual events as well as the team gold with her U.S. teammates. Additionally she won the vault silver medal. Biles was the first U.S. woman to win back-to-back World all-around titles in almost twenty years, since Shannon Miller accomplished the feat in 1993-94. She overtook Miller in the most world championship gold medals by winning six in the last two years to Millers five. Biles also became the first U.S. woman to win four gold medals at a single world championships.

Biles may very well be one of those once in a life-time gymnasts. She achieved these results by competing some of the hardest gymnastics skills with clean execution (the gymnastics basics: straight legs, pointed toes, correct body positions and stuck landings). And she did it with so much energy and power, it is easy to see that she has a lot of room to do even more. While most gymnasts look to be at the very edge of their abilities, Biles soars through the air with room and energy to spare.

Biles will resume full time training, with a slower pace and some time to work on new skills.”I am taking training a little bit easier right now and will learn a few new skills on a few events” said Biles in a media phone interview. Though she may not really need to continue adding to her difficulty score (she led the all-around competition in difficulty) she has not yet reached her limits by any stretch of the imagination. In fact, her shoulder injury earlier in the year caused her to have to downgrade bars from last year. After the world championships, coach Aimee Boorman mentioned in a tweet that now that her shoulder is healed, Biles will be looking to upgrade her second vault to a Cheng. In the interview this morning, Biles confirmed that she will be working toward the Cheng. She also shared that since her Amanar vault is so consistent, Marta Karolyi has encouraged her to try for the triple-twisting yurchenko. If successful, Biles would be the first woman in history to compete this vault.

As for other upgrades, Biles said she would also be looking to get bars back to her former level of difficulty by adding the shaposh half back in. She said she also might work the double-double layout on floor, a pass competed by only three other female gymnasts on the international elite level. And though she had phenomenal success this year, she was only able to hit beam like she does in training in event finals. Biles said she plans on addressing that in her training plan as well.

After leaving her longtime gym earlier in the year with Boorman, Biles trained for a while at another local gym. Now, they are training in a temporary location while the gym that her parents are building is completed. It is supposed to be completed in May or June of next year. For now, she is content to be training somewhere they can call World Champions Centre. “In the beginning they kept telling me they were going to start building [and it wouldn’t happen]… but I am busy training. I don’t really pay attention to the details, it’s not my business.” Running a gym is not something she sees in her future, and is something she is happy to leave to her parents.

What she does see in her future is college gymnastics. Earlier this year, Biles committed to UCLA, and she is firmly committed to maintaining her NCAA eligibility. Though she will put all of her energy and training into shooting for the 2016 Olympics, she currently does not have plans to go pro. “My parents have talked about it a little bit but haven’t pushed me. They are letting it be my decision.” Biles acknowledged that things might change in the future, but for now that is her direction.

With Biles’ power, energy, determination and team of supporters, it seems that for her the sky is the limit. Literally. 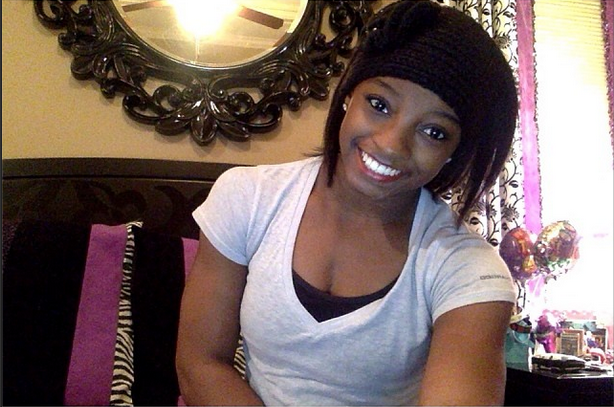 Simone Biles has been in the middle of turmoil and change over the last month. She has been dealing with a shoulder injury that caused her to pull out of the AT&T American Cup. Additionally, she and her coach announced a decision to change gyms.

Martha Karolyi confirmed to Gymnastike on Sunday that Biles had been given the ok by her doctors to return to training and would be able to compete in the upcoming Pacific Rims Championships. Indeed, Biles spent her 17th birthday at the national team verification camp, where she hoped to make her case to be named to the Pacific Rims team.

Biles was added to that team yesterday, when USA Gymnastics confirmed the six gymnasts who would be representing the USA. In response, she tweeted:

Today, the Houston Chronicle confirmed that the Biles family are in the process of building the World Champions Centre, which will become the permanent new training center for Biles and coach Aimee Boorman. In the meantime, they will be training at AIM Athletics in The Woodlands.

AIM Athletics say that their goal is to “develop outstanding athletes who will deliver quality performances and a positive public identity to the community.” They want to “help each athlete grow as a total person and develop skills to better meet the challenges of a rapidly changing society.” This seems like a great environment for Biles in the midst of her own rapidly changing life.