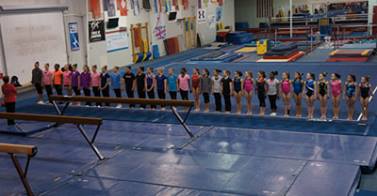 The final selection camp for the US Women’s Teams competing at the City of Jesolo Trophy, the Pacific Rims Gymnastics Championships and the Tokyo World Cup will be this weekend at the women’s national team camp. These camps are held roughly every month at the USA Gymnastics National Team Training Center at the Karolyi Ranch in Huntsville, Texas. Sometimes these camps are to help in training and preparation, but other months they are more the format of a meet. The results of these internal meets help determine the assignments for individuals and composition of teams for upcoming competitions. The March training camp is generally one of these such camps, selecting teams for the spring competitions.

Team USA’s entries for the City of Jesolo Trophy (to be held March 22-23 in Jesolo, Italy) will be announced on Monday at the conclusion of the camp. The gymnasts representing the USA at the and the 2014 Pacific Rim Gymnastics Championships (April 9-13 in Richmond, B.C., Canada) and the Tokyo World Cup, (April 5-6 in Tokyo, Japan) will be announced later in the month.

Each athlete wanting to represent the US at these competitions will have to show that they are ready to compete full-routines in an international competition setting to Martha Karolyi and the rest of the selection committee. The selection committee will look at their current state of readiness along with each gymnast’s track record to determine the make up of these teams.

Lexie Priessman, Amelia Hundley, McKayla Maroney and Laurie Hernandez are the current national team members who are not in attendance.