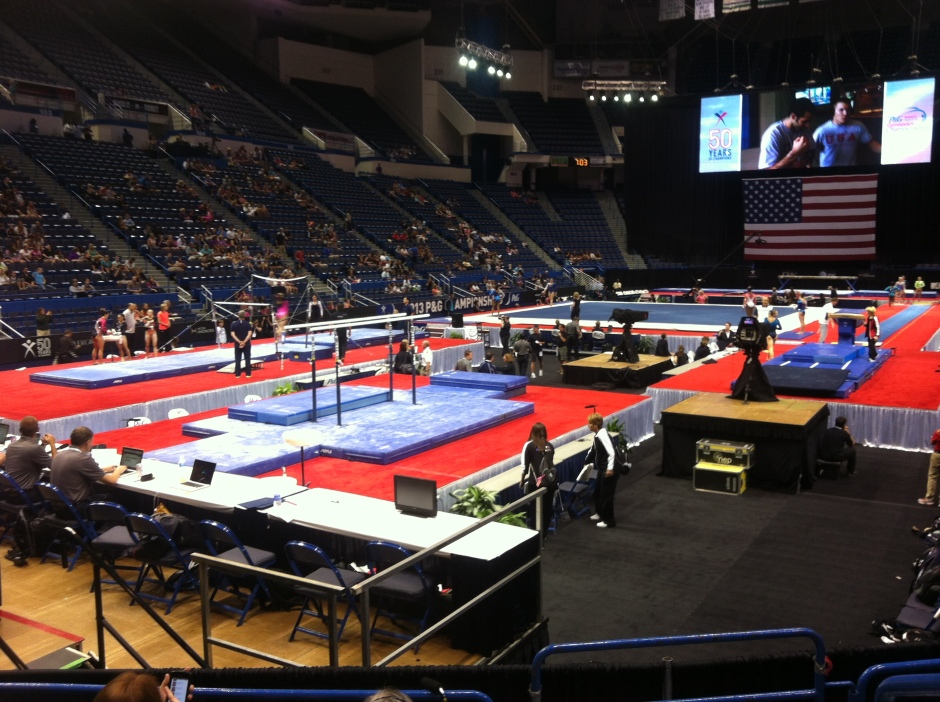 I walked into the arena and was immediately struck with how different the atmosphere was from last year. Last year at Nationals, the air was electric with the tension, nerves and excitement of an Olympic year. This year felt so relaxed and laid back in comparison.

I took my seat next to an older African American gentleman. He was really nice and as we chatted I asked what had brought him. He said he was Kyla Ross’s grandpa! Turns out I was sitting near a few family members. Kyla’s uncle was there, and we were sitting behind Mike and Erin Maroney. And then I had a celebrity sighting…. Tarynn Maroney!

Tarynn is McKayla’s little sister… she is without a doubt going to be a star and is so incredibly cute. Anyone who follows McKayla on twitter is treated to a bunch of adorable pictures of Tarynn and the sweet relationship between them. Erin was playing on her iphone with one of those cute brass rings case. We had a fun little chat about it. Mike’s face lit up when I gushed about how cute Tarynn was and how much I loved her on twitter. But the highlight of my evening was watching Kyla’s proud grandpa cheer her on and bringing him up to speed on some of the intricacies of gymnastics. I sent a tweet for him wishing her luck.

After the competition, I went with @lchops96, @jennifercarolyn and @SpannyTampson  to a fun little Irish Pub for dinner. And after a while, who did we spot, but Al Trautwig and Andrea Joyce! And after a bit, Tim Daggett joined them. We tried to subtly take pictures by pretending to be taking pictures of each other. Which made us laugh a lot.

As dinner wrapped up, I decided that I am way too old to be fangirling. So on our way out I asked them for a picture. I told them we were gymnastics bloggers and Al said “Oh no, you are going to use this picture to say this is the idiot (or something like that) that I always tell you about.” Tim had been on a podcast with Spanny and had to go to great lengths to explain what a podcast was to Andrea.

After the pic, Tim and Al politely went back to their group, but Andrea stayed for a short but hilarious conversation. We were talking about how Kyla has grown up so much and she was reliving an interview when Kyla was a junior – complete with a Marta impersonation and a discourse on vitamix. She was so much fun!

Today I am looking forward to the 50th celebration and the induction of the Fierce Five into the Hall of Fame. Oh yeah, and some more incredible gymnastics!