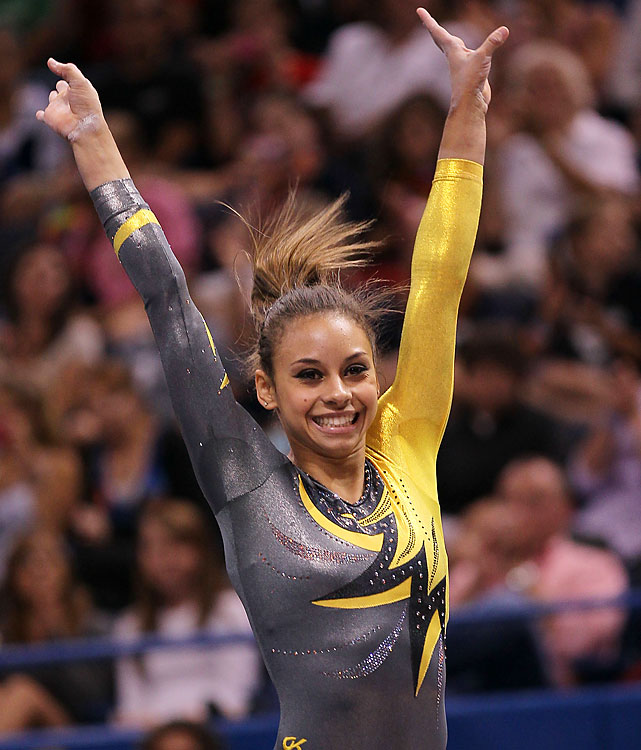 What do you do when the American dream doesn’t come true? When you work hard, harder than most people can ever imagine, and it just never quite comes together for you? When everyone expects you to be a sensation? When you win – and then fail- on the largest stage in your field?

That is the story of Mattie Larson. Mattie was a celebrated junior, who showed so much promise. A talented all around gymnast, Mattie was most beloved for her floor. She showed so much pizazz and artistry, in the midst of incredibly beautiful and difficult tumbling. And she drew you into her performance, mesmerized with her loveliness. Just the kind of story we Americans love, a young protege who begins to delight us with her prowess.

But even in the midst of that, Mattie was plagued with injury. She missed out on the 2008 Olympics due to a leg injury and worked her way through 2009 battling injuries as well. Then 2010 finally seemed to be her year. After dazzling America with a charming and powerful performance at Nationals, Mattie fell short on the world stage – twice. Her falls on floor were costly in America’s bid for the World gold, and the backlash against her seemed to be more than she could bare.

But even with her failure, America loves Mattie. In a world of trash talking about gymnasts, people root for Mattie. We so want her to succeed. We know her. And we love her just the same.

Mattie decided to leave elite level gymnastics after that, and turned to NCAA. To Miss Val, who had known and loved Mattie since she was seven years old. It seemed that with Miss Val’s loving tutelage, and their power combination of incredible choreographer and dazzling performer, it would finally be Mattie’s time to shine.

And Miss Val’s influence did seem to help Mattie in the mental aspects of the sport. The brought together two delightful floor routines. But in the end, it was not to be at UCLA either. Plagued with injury still, she never really found her stride. Even so, we continue to love Mattie and root for her to succeed.

What is it about Mattie Larson that we all love? Of course, there is the obvious answer. She has dynamic, beautiful gymnastics, gorgeous lines and enchanting performance abilities. But I think it goes beyond that. There is so much in Mattie that we can relate to.

Mattie has so much brilliance, so much potential. And yet she misses. In life, we miss so much more than we come through in the clinch. We could be brilliant, but for whatever reason – physical, mental, emotional- we are not. We are rattled, we give up, we crumble. Yes, we love those that shine. But we often identify more with the agony of failure than the glow of success. Will any of us ever forget the look on Mattie’s face when she walked off the floor of team finals in 2010? We remember it so vividly because it is a feeling we have all had.

But we do not love Mattie because she fails. We love Mattie because despite her failures, she keeps trying. And has moments of beautiful, shining success. Sometimes, life comes together for us. The stars align, and all of our hard work pays off at just the right moment. Most of the time, it doesn’t. In Mattie, we see how to live authentically, with passion in the midst of both times in life.

We know Mattie. And we love her.

But what is as inspiring to us as Mattie, is the love and wisdom she has received from Miss Val, who has seem to constantly inspire and pick Mattie up. Who brought out the very best in her. And who helped her know when to retire with as much grace and dignity as she performed. When should Mattie quit? When gymnastics no longer brought her joy. When the part of it she loved became stale.

International Gymnastics did a great interview with Mattie that captures it well.

I think it was a whole process since I’ve been at UCLA. I’ve known Miss Val (Kondos Field) and Chris since I was about 7, and they’ve known that, yes, I’ve had a lot of success in gymnastics, but it’s taken an emotional toll. It’s not an easy sport. My process here at UCLA made me feel that I could finally have a voice and make decisions for myself. For a while, I think I was ready to move on, and they finally gave me the chance to do so. I couldn’t imagine making this decision anywhere else or at any other time. I finally got clarity.

The most important thing that Mattie has, is that she is known – for her failures AND her successes – and loved despite them both. And in the end, that is a pretty amazing thing.