The 2015 American Classic was held this weekend at the Karolyi Ranch. The first of two qualifiers for the P&G National Championships, the American Classic is an important stepping stone for many gymnasts. The 2015 May Elite Qualifier was help in conjunction with the competition, allowing gymnasts to both qualify for elite and for nationals.

At the American Classic, Colbi Flory of Texas Dreams took the gold, scoring a 56.7. Deanne Soza of Arete scored a 56.6 for the silver. Emma Malabuyo of Texas Dreams and Morgan Hurd of First State tied for bronze with a 56.5. Pictures and posts on Instagram celebrate the achievements. 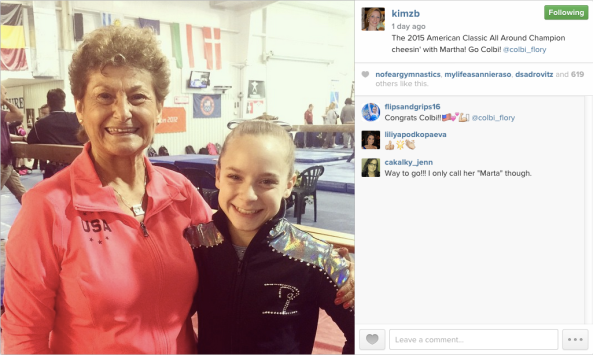 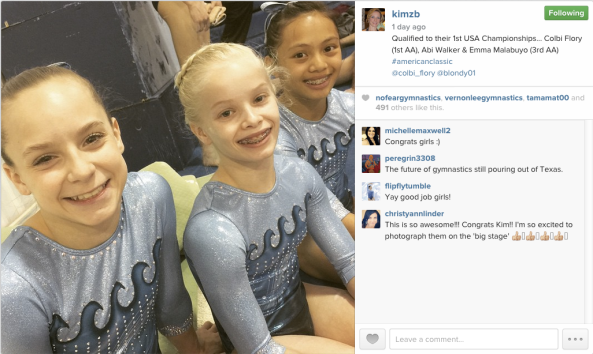 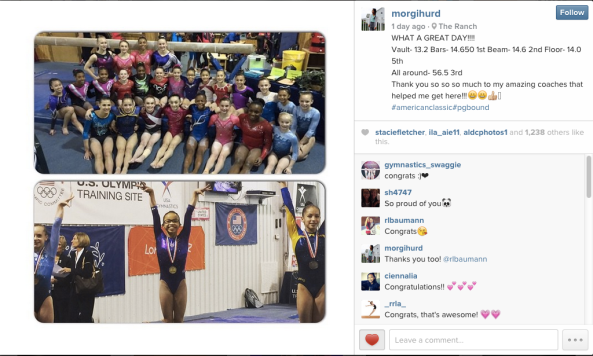 Taylor Lawson took the all-around for the seniors at the May Elite Qualifier with a 53.6. Kylie Dickson of All-Olympia came in second with a 52.3 followed by Samantha Durante of Georgia Elite for third with a 51.6.

Gabby Perea of Legacy Elite won all-around for the juniors with a 55.2. Kaitlin DeGuzman of Metroplex took second with a 53.2 and Alyssa Al-Ashari of Twistars came in third with a 52.75.

The gymnasts who qualified to the 2015 P&G National Championships are (American Classic competitors in bold):

The gymnasts who qualified to the 2015 US Secret Classics are:

The full results are (via USAG):

This Saturday, May 30, the 2015 American Classics will be held at the Karolyi Ranch. The meet is the first of two qualifiers for the 2015 P&G Gymnastics Championships. The USA Gymnastics’ national championships, to be held in Indianapolis, Aug. 13-16 are the pinnacle competition for gymnasts in the USA, and an important stepping stone to qualifying to the World Championship team. In the past, rising stars have made their debut at this competition. Last year, Jasmine Foberg won this event. She went on to win the 2014 Junior National title.

There are many avenues for gymnasts to qualify to the P&G Championship. The most common is by earning a 54.0 (seniors) or a 52.5 (juniors) in the all-around at the American Classic or the Secret U.S. Classics, which will be held later this summer. For event specialists, senior athletes can also qualify by earning a three-event score of 41.25 or a two-event score of 28.0 at either of these events.

The complete roster for the American Classic is as follows.

Continuing our look at the current national team members, today we will look at the new seniors.

Key has dominated the junior ranks over the past two years, winning every competition she entered with a great margin to spare. She does not have an incredible stand out event, but rather is incredibly clean and strong on all four events. She placed second to Simone Biles in the all-around and to Kyla Ross on uneven bars at the recent City of Jesolo Trophy.

Dennis had a strong junior career, placing at the top of the field in numerous competitions. However, she has yet to make her senior debut due to injury. Dennis is a strong all-arounder, as well as incredibly powerful on floor and has a great bar routine as well.

Emily Schild at the 2015 City of Jesolo. Photo by Philippo Tomasi via USA Gymnastics.

Schild showed incredible promise in 2013, but battled injury in 2014. She made her international debut at the 2015 City of Jesolo Trophy. Her strongest events are vault and floor.

Megan Skaggs, training at the City of Jesolo. Photo by Philippo Tomasi via USA Gymnastics.

Skaggs has been in the top ten over the last few years in the junior division, especially on floor. She finished eighth in her senior debut at the all-around at the recent City of Jesolo Trophy. She has gorgeous form and catlike landings.

The national team members, by age division, are listed below.

The Federation of International Gymnastics announced decisions about the future of Olympic gymnastics. Under the new system, the number of gymnasts in the team competition will be reduced from five gymnasts to four, opening up 24 extra spaces for male and female gymnasts at the Olympic Games. These spaces will be filled by those who qualify as all-arounders or event specialists through a qualification system that will be independent of the team selection process by each individual country. These changes will take place beginning in 2020.
According to Steve Butcher, chair of the Men’s Technical Committee, “the team format will be four gymnasts, four compete on each apparatus, and three scores count. The best countries will be able to qualify up to two individual gymnasts also through World Cups, Challenge Cups, and Continental Championships. There are many other formulas for AA gymnasts to qualify outside of the teams. The final details are still to be worked out, but the format is now set.”
In one view, the total number of gymnasts per country has the potential to increase. The number per team will decrease to four, but two additional gymnasts will be able to qualify for potential all-around or event finals slots. Potentially, more specialists will be able to qualify, and this will give opportunities to countries without qualified teams to still qualify individual gymnasts.

The FIG released a Q&A regarding the decision here.

Jordyn Weiber has officially retired from elite level gymnastics. And Kyla Ross never left. That leaves three of the Fierce Five to discuss their possible impact in 2015.

Raisman returned to competition for the first time since the 2012 Olympics at the City of Jesolo Trophy in March. She showed incredibly strong training sessions before the competition. In the qualifications, she posted the third highest score on beam, even though it was not nearly as strong of a routine as she had shown in training. Though she has been training and amanar, she just competed a double twisting yurechenko. It was a clean vault that showed definite potential for her amanar in the future. She seems to have improved on bars. She also qualified for event finals on floor,and ended up with the bronze medal on the floor and in the all-around.

Douglas also made her competition comeback appearance at the 2015 City of Jesolo Trophy. She came in fourth in the all-around and tied for third on beam and bars and fourth on floor. Douglas looked great in training, and her progress in training seems to be in an incredibly positive direction.

Maroney has disclosed on social media that she has struggled both with adrenal fatigue and depression over the last year. She has also talked about her fear of getting injured again. Though she continues to refer to her training, and her dreams of competing in the 2016 Olympics, it is unclear on where she is actually at in her training and if she will return.

Heading into the series of competitions this summer that will determine the top gymnasts in the USA, it is helpful to to take stalk of all the gymnasts expected to make their mark in the 2015 elite season. In the first of this series, we will start by looking at the gymnasts that made up the 2014 World Championship team. TThey are without a doubt some of the front runners in the 2015 season. Below are the gymnasts, and where they could likely contribute to team USA on a world stage.

Biles is without a doubt one of the most dominant gymnasts of all time. The combination of her innate natural talent, polished training and positive personality make her a female gymnast without equal. Healthy and at the top of her game, it is currently unimaginable that any gymnast in the US or the world could come close to catching her. Unless she is injured, stops training, or another gymnast bursts onto the scene, it is very likely that she will continue her all-around reign both this year and into the 2016 Olympics. When it comes to event finals, she has the ability to represent on all four. Only McKayla Maroney seems to have a shot at overtaking her in the vault (if she returns to competition), and Biles currently has not match on the floor.

Ross has gone from event specialist in 2012 to team anchor ever since. For the 2013 and 2014 seasons, Ross has been second only to Biles in the all-around at both the National and World Championships. She has also been the team leader, voice of wisdom and steady rock for the rest of the US team. This year, Ross is working on adding in a bit more difficulty to maintain her standings in the all around and be competitive with the upcoming juniors. She has also grown a ton in artistry over the years, and become a crowd favorite on floor even if her difficulty does not usually allow her to get into the finals.

Locklear burst onto the scene in 2014 to become the USA’s top bar worker. She had been injured the year before, so her level of difficulty was quite a surprise to most fans. She also has beautiful long lines and superb execution. She won the US national title on bars, represented the USA at the World Championships in the team final on bars and took fourth in event finals. Locklear has been injured at the start of this year, so this summer will be the first we see of her. She has been working to improve on her other events as well as maintain her stellar uneven bars set.

Baumann is absolutely beautiful on beam. She represented team US in the team finals at the World Championships. In 2015, she also qualified to the event finals at the City of Jesolo as the second highest scoring gymnast in the USA. Baumann is clean and beautiful on all her events, and could represent Team USA on any event in a pinch. However, with the influx of new competition in the US, she has to improve her scores to continue to represent the USA. Beam is an event that the top all-arounders in the USA are strong on. She will need to show that she is even stronger.

Skinner is known as the daredevil of the US team. She is the only one in the world to rival Biles in difficulty. She is especially exciting on vault and floor. Unlike Biles, Skinner struggles to complete her incredibly risky routines with clean execution. She has continued to improve in this area, enough to make the 2014 World Championship team and to make two event finals. She will have to continue to show major improvements in these areas this year to beat out the new competition.

Kocian looked to be an incredibly strong candidate for the 2013 World Championship team, until an untimely ankle injury kept her out of the running. In 2014, Kocian was able to come back and represent the USA on her best event, the uneven bars, during the team finals. However, a mistake in qualifications kept her from qualifying to event finals. Kocian was injured again at the beginning of the year, so we have yet to see where she is fitting into the picture. However, at the top of her game she is a steady all-arounder and a top bar worker. Desch made the World Championship team as an alternate. Desch has beautiful form, and can be strong on all four events. However, she lacks the consistency of many of the other gymnasts from the USA. She will be looking to improve in this to represent the US in the future.