Simone Biles gave it her all to compete this week at the 2014 Pacific Rim Gymnastics Championship. But in the end, her body just wasn’t quite with her. A shoulder injury kept her from the 2014 AT&T American Cup the beginning of March. Time to heal and be at her best just wasn’t on her side. As a precaution, USA Gymnastics decided this afternoon to withdraw her from the competition.

In media interviews following the first training session, Biles said that training was pretty rough. She assured us that the ice on her shoulder was a normal part of her regular routine after practice, but when asked if she was feeling healthy and ready she said they were “figuring it out.”

The US girls started their second training session of the day on beam. Biles looked good, and finished out the rotation with a strong routine. However, there were many serious chats on the side with coach Aimee Boorman.

Next on floor, she debuted her awesome new, somewhat more mature, floor routine and looked great. However, in her full routine she barely made her Biles and in tumbling runs after sat it down.

The US girls sat out the vault rotation, and it was during that time that it was decided that she would step out of the competition. “Simone was ready to compete, but her shoulder started bothering her again during training so she is withdrawing as a precaution,” said Martha Karolyi, U.S. women’s team national coordinator.  “We want to be careful given the upcoming schedule for 2014 because Simone is an important part of the team.”

Aimee Boorman and Simone Biles sit on the sidelines after deciding to withdraw her from the 2014 Pacific Rims.

The rest of the team went on to do bars, while Biles sat with Boorman on the side, both obviously disappointed in the outcome of the day.

All in all, Biles looks incredibly fit and prepared. She just needs a little time. And luckily, time is on her side. They broke ground on her new gym today. With time for her new training facilities to be built and her shoulder to heal, she will no doubt be a force to be reckoned with later in the year.

Peyton Ernst, who was originally the second alternate, will be flying in to replace Biles.

The Russian National Championships are in full swing, with the first day of competition in the books. The all-around and team qualifications took place today in Penza, where World and Olympic gold medalist  Aliya Mustafina (Moscow) walked away with her fourth national title.  Mustafina scored a 59.566, nearly a point and a half higher than her fellow Moscow teammate in the silver position, Alla Sosnitskaya (58.067). 2012 Olympian Anastasia Grishina (56.467) rounded out the podium in bronze for a Moscow sweep of the medals.

Mustafina had the highest scores on balance beam and floor. Maintaining her reputation as the reigning world champion on beam, she delivered a solid beam set earning her a 15.4, the highest beam score of the year at any of the major international events. Mustafina earned a deduction on bars for hitting her feet on the mat, which took her out of the top three on what is usually her best event.

Sosnitskaya is a second year senior, and has not represented Russia on the world stage. She had a solid meet, hitting four for four routines. Her best event is floor, where she had the second highest score of the competition with a 14.833.

There were high hopes in the Russian camp that Grishina would really shine at this competition. While she managed to get on to the podium, her performance was not one that gives any confidence that 2014 will be a stronger year for her than she has shown in the past. Grishina has long been viewed as a talented gymnast who could really help round out Russia’s all-arounders for serious medal contention on the world stage. She has not yet been able to deliver that kind of performance, and many are hoping that this will be her year.

One of the most anticipated aspect of the championships was Olympic silver medalist Viktoria Komova’s return to competition after a year and a half absence. Komova competed on three events. Her best event was no surprise, scoring 14.900 on bars which put her as the third highest score on the event. She competed a simple and low valued vault, did not compete on floor, and had a rough beam routine earning only an 11.6.

Surprising everyone, World and Olympic team medalist Ksenia Afanasyeva decided to compete at the last moment to help her team qualify. She came out with the second highest vault score despite heavily taped ankles due to her lingering ankle injury. World and Olympic teammate Tatiana Nabieva, and reigning Russian National Champion was also a surprise in the competition as she had declared her retirement from gymnastics over social media at the end of 2013.

Other notable routines included Russia’s vaulting specialist 2012 Olympian Maria Paseka, who had the highest vault score of the competition, scoring a 15.033. First year senior Daria Spiridonova put up the highest bar’s score with a 15.133, while 2013 World team member Anna Rodionova came away with the second highest score at 15.06. Second year senior Polina Fedorova scored the second highest of the day on beam with a 14.500.

Tune in to Russian gymnastics on their website at sportgymrus.ru, where the remainder of the competition will be livestreamed. Available videos from today’s competition are linked or shown below.

Anna Rodionova: 15.067 (routine not available, but here she is a few weeks ago at Cottbus)

Aly Raisman has been shooting for a return to competition at the 2014 Secret Classics since her return to training last fall. She had taken a full year off from training after the Olympics and has been back in the gym for about seven months, working on a return to gymnastics. In the past, she has said that getting back into training the full number of hours she needs to train to return to her previous level of competitiveness has been her biggest challenge. 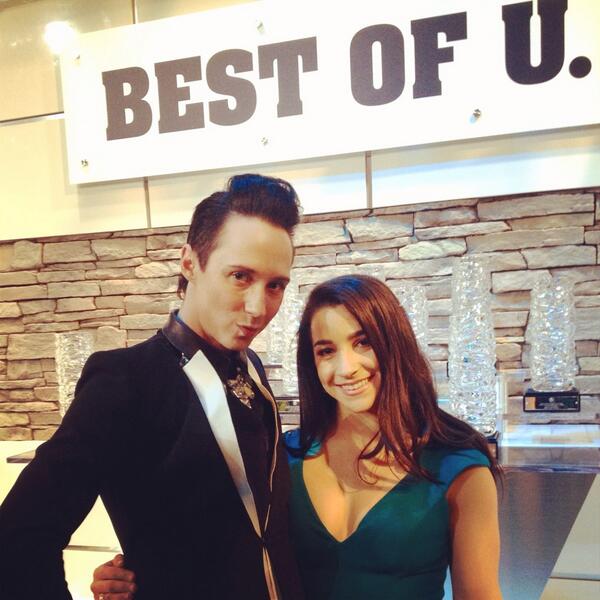 Aly Raisman at Best of the US with Johnny Weir. Photo by Aly Raisman (twitter)

And though she has been trying to meet that challenge head on, the wisdom of her coaches has been to take it slow. A pow wow between Martha Karolyi, her coaches Mihai and Silvia Brestyan has led to a decision to wait until 2015 for a comeback to competition.  According to NBC, Raisman said at the Best of U.S. Awards on Wednesday, “Martha and Mihai and Silvia Brestyan, my coaches, they all decided just to wait and to take it slow and to not rush. My goals are more 2015 and 2016.”

Her next step toward that goal will now be focusing on readiness to attend a national team training camp after the 2014 World Championships. Many of the gymnasts have said over the years that the training camps and Karolyi can be more intimidating than the judges and big competitions. Raisman seems to echo that sentiment. “It’ll be my first time being at training camp in over two years, so I think it’ll be [Karolyi’s] way of really watching me,So I’ll be really nervous, but I’m working really hard so she can see the improvement.”

Raisman has been adamant since winning her Olympic medals in 2012 that she wanted to continue to compete and planned to stay in the sport for the 2016 Olympics in Rio. Many gymnasts have found the path to returning to the commitment of intense training in the midst of fame and opportunities after winning an Olympic medal to be a difficult one. Raisman is no different, but seems to continue to press ahead with her goal, if more slowly than her fans would like.

The official roster of the women slated to compete in the women’s gymnastics portion of the Pacific Rim Gymnastics Championships next week. Check out the full list for the competitors in the other divisions.