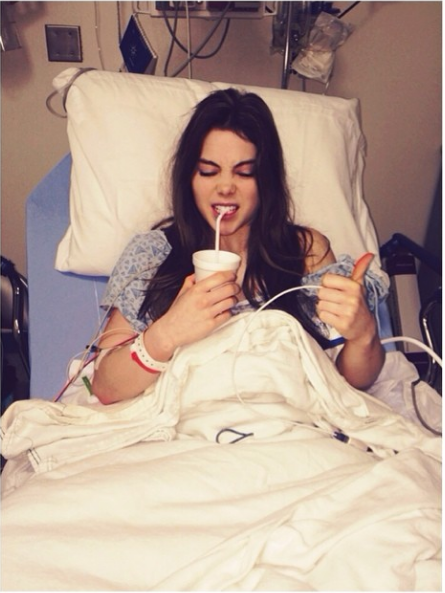 McKayla Maroney has been having trouble with her knee since the 2013 World Championships. After rest did not fix the problem, she finally underwent surgery on March 6, 2014. She seems to be taking her fourth surgery since the Olympics in stride and trying to remain in good spirits.

Determined as always, McKayla vowed to her teammate Simone Biles over twitter that she would keep her hospital bracelet on until she could run again. “@Simone_Biles: @McKaylaMaroney love how you’re still rocking the hospital bracelet” It’s not coming off till I can run.”  Since we all know how much McKayla loves her fashion, getting better fast to get that bracelet off will be top priority.

McKayla hates using her crutches and seems to be trying to just live one footed as much as possible. She is putting her gymnastics balance and flexibility to the test. The way she is moving seems to imply that not only is she not supposed to put weight on her leg, but she’s not supposed to bend her knee either.

Always the entertainer, McKayla seems to be having fun doing jumps and swings on her crutches. This may be the beginnings of a new sport. And at the very least, made someone’s day.

For someone who can fly through the air, being limited to crutches is especially frustrating. As she so subtly shares in this vine.

Get well soon McKayla! We are all rooting for you.